Human Psychology Pyramid - Your Own "Theory Of Mind" 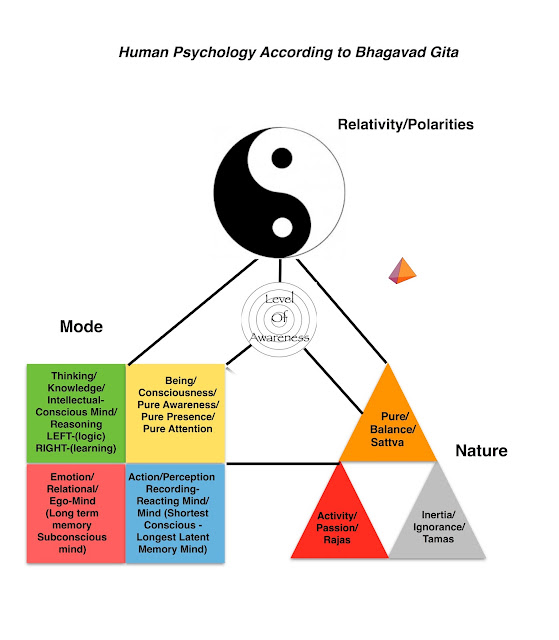 स्वतन्त्रता Way as per Bhagavad Geeta

As strong wind can carry boat away from established material or spiritual shore, similarly any of senses can carry the mind (ego-feeling-emotion-relational-mind) from its established intellectual-logic-learning-reasoning-mind or soul-spirit-self-consciousness-witness,

Be free from duality of pair of opposites,
Be ever balanced in purity from activity and inertia when in relative state,
Be independent of attachment to perceptions, emotions, thoughts,
Rise above the three states in meditation to transcendence when in absolute state,
Be Self aware (in meditation and otherwise always)
(2.45) - Geeta
Be steadfast in Karma Yoga,
Perform your dharma without attachment to failure or success,
Steadfastness and evenness of mind is called Yoga,
(2.48) - Geeta

YOUR OWN "THEORY OF MIND"

Imagination helps children understand and develop
their own Theory of Mind
and how to deal with all possibilities
that conversation, situation, events
with other humans would present itself.
What is “Theory of Mind” ?
It is theory that all children develop subconsciously.
“Theory of mind" is the ability
to attribute mental states
—beliefs, intents, desires,
pretending, knowledge, etc.
—to (previous experience of)
oneself and others and to
understand that
others have beliefs, desires,
intentions, and perspectives
(based on their own personal previous experiences)
that are different from one's own.” - Wikipedia
It is your “THEORY OF MIND”
- (i.e. PSYCHOLOGY PYRAMID) that
consciousness and BEING
is more important than INTELLECT
than EMOTIONS than ACTION and PERCEPTION but
Somebody may have their own different theory of mind and harmony happens when we do not judge
each other’s theory of mind.

(76) Jesus said, "The kingdom of the father is like a merchant who had a consignment of merchandise and who discovered a pearl. That merchant was shrewd. He sold the merchandise and bought the pearl alone for himself. You too, seek his unfailing and enduring treasure where no moth comes near to devour and no worm destroys." - Gospel of Thomas

Development Of "Theory Of Mind"